The Laughter Factory: “After Every Bitter! There’s A Sweet” Tour in Dubai | Coming Soon in UAE
Home / Upcoming Events in Dubai and other Emirates / Culture & Entertainment/
To get your personalized content feed, feel free to register, sign in and select what interests you in your Preferences.

The Laughter Factory: “After Every Bitter! There’s A Sweet” Tour 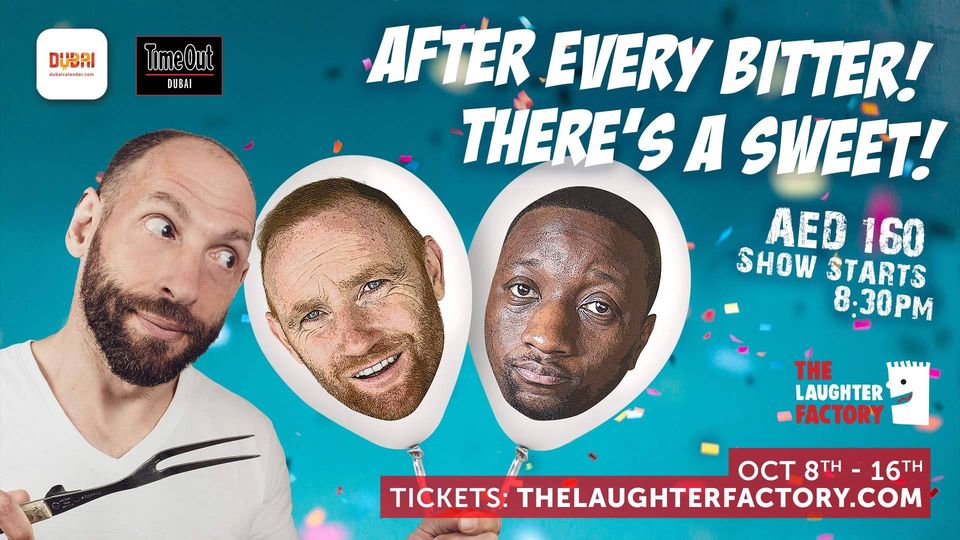 The Laughter Factory is coming with a new comedy tour – “After Every Bitter! There’s A Sweet” taking place from October 8 to 16.

Provided by The Laughter Factory, there is a new comedy tour “After Every Bitter! There’s A Sweet” featuring the well-acclaimed comedians. The comedy trio made of Adam Bloom, Babatunde Aleshe, and Rory O’Hanlon are going to set hilarious performances making fun of marriage, life, and world madness.

In the first act, Adam Bloom is one of Britain’s most inventive comedians nowadays. He will showcase his meticulous, accurate jokes killing with pure honesty. This award-winning funnyman has sell-out solo shows in Edinburgh Festivals and Australia, has written three series of ‘The Problem with Adam Bloom’ for BBC Radio 4, and made numerous appearances on TV.

Next comedian Babatunde Aleshe represents impeccable stagecraft and comic timing performing with fresh hilarious life content. Having an acting career, he appeared in “Waking the Dead”, “Pelican Blood”, alongside Dave Chapelle in his live showcase “The Process” as well as being part of “Celebrity Gogglebox” for Channel 4.

Finally, Rory O’Hanlon who was described by the Irish Times as having “a joke every 30 seconds”, has rapid-fire delivery making viewers all around the world cry. With numerous international performances at comedy festivals, Rory sets himself as a prolific writer for several magazines and often takes part in Irish TV shows and films (“Spring Clean”).

*One item of food must be purchased at Movenpick JBR & Hilton Dubai Jumeriah.