Holy month of Ramadan, Day 4 | Coming Soon in UAE
Home / Articles / Information/
To get your personalized content feed, feel free to register, sign in and select what interests you in your Preferences. 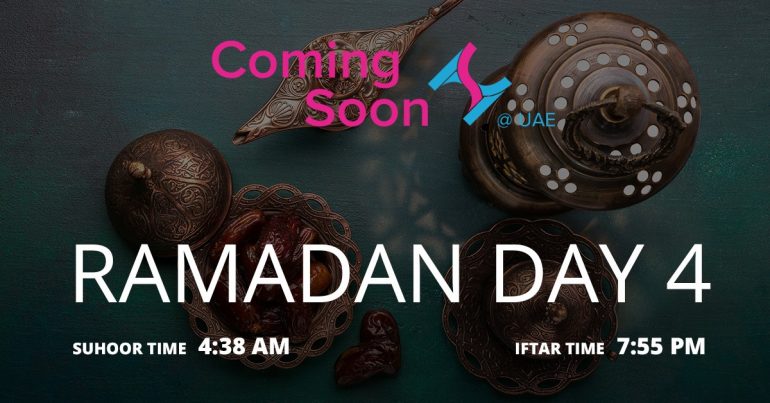 16 April 2021
5 minutes to read
Advertise on Comingsoon.ae
Join our Telegram Channel! Receive all the latest updates Faster. Add Your Event

Muslims are fasting during Ramadan. Eating is allowed before dawn, these meals are called Suhoors. The fast-breaking second meal of the day is named Iftar. Iftar time – is immediately after sunset, after the call to evening prayer by a muezzin.

In Arabic, the word “Iftar” means “breakfast”. After a full day of fasting, believers get together with families and friends to share a meal. Usually, Iftar events occur in the most comfortable and beautiful setting – at home, in a cozy cafe or a luxurious restaurant. Often during the month of fasting Ramadan tents are installed, where tens or even hundreds of people can take an evening meal at the same time. Also, Iftars are often organized by a mosque for the community.

Traditionally, many Muslims use dates as their first food after a day of starvation, most often three dates are eaten. This tradition is considered to be a tribute to the history of the Prophet Muhammad, which went this way and broke his fast with dates. Other dry fruits, water, Ramadan juices, and similar foods are also used to break the fast. After the evening prayer, believers may eat other various dishes that they prefer. It can be a variety of dishes from traditional Arabic cuisine, as well as the best dishes from other cultures from around the world.

It is considered a very important tradition not only to eat Iftar meals but also to help get food to those who need it, for example, making contributions to various charities. In this way, compassion and mercy are manifested and the believer himself is being improved spiritually.

O Allah, on this day, strengthen me in carrying out Your commands, let me taste the sweetness of Your remembrance, grant me, through Your graciousness, that I give thanks to You. Protect me, with Your protection and cover, O the most discerning of those who see.