Busta Rhymes, Craig David and Rick Ross live in Abu Dhabi in Abu Dhabi | Coming Soon in UAE
Home / Upcoming Events in Dubai and other Emirates / Dining & Nightlife/
To get your personalized content feed, feel free to register, sign in and select what interests you in your Preferences. 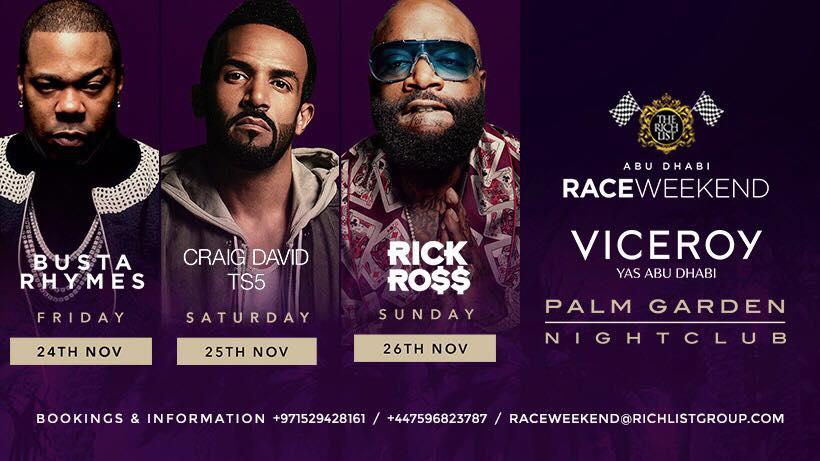 The concert of trio Busta Rhymes, Craig David and Rick Ross live will take place from 24th to 26th of November, 2017 at the Rush club, Yas Viceroy Abu Dhabi.

The massive Abu Dhabi F1 weekend just got even bigger – after mega-selling music stars Busta Rhymes, Craig David ad Rick Ross were announced for one of the UAE’s biggest events of the year.

All three superstars will be performing in the landmark hotel’s specially-constructed Palm Garden Nightclub for three incredible party nights, with Ross in Abu Dhabi for the very first time.

Internationally-acclaimed Busta Rhymes – who has racked up millions of record sales during a career spent at the top – will get the action revved up to the max with an eagerly-awaited set on Friday, November 24.

Talented Brit Craig David, still beloved for smash hits such as Rewind, Walking Away and 7 Days, has wowed the crowds on previous appearances at the F1 extravaganza and will be making a triumphant return on Saturday, November 25.

Rick Ross, who has previously been named the Hottest MC in the Game by MTV, will cap off an unforgettable trilogy of stage shows with a massive set after the season-closing F1 race itself on Sunday, November 26.