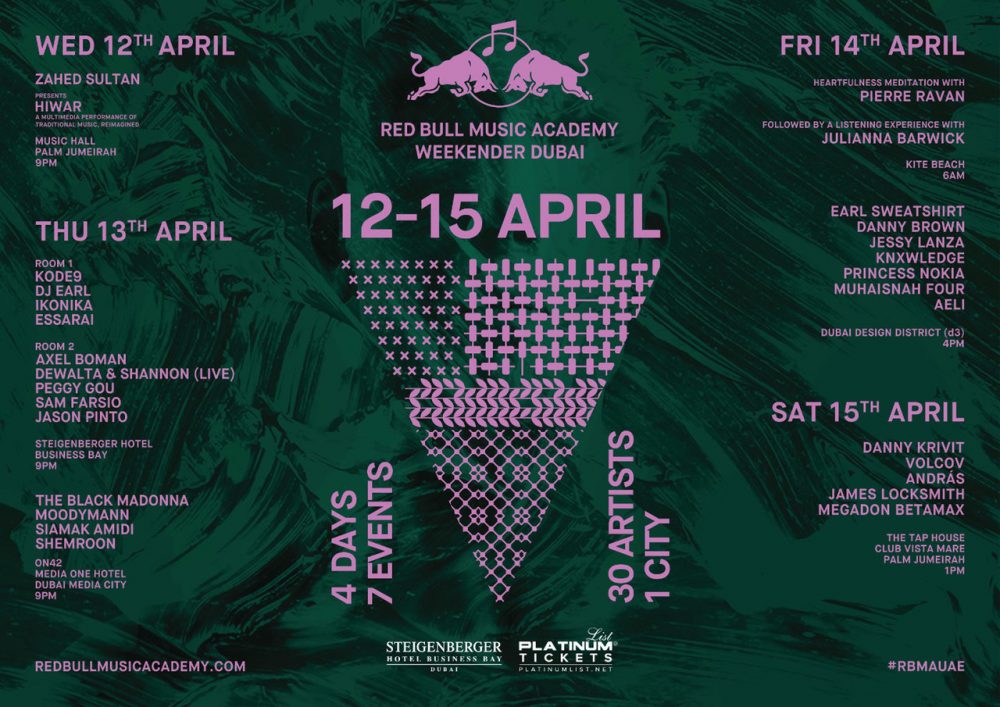 The Red Bull Music Academy Weekender will be held from 12th to 15th of April across Dubai.

The Weekender will start off on WEDNESDAY at Music Hall, Palm Jumeirah, at 9pm, with GCC-based multimedia artist Zahed Sultan presenting his HIWAR project, which explores the musical heritage of the traditional pearl diving music.
Tickets Booking

THURSDAY will see a night of trailblazing house and disco as well as some bass-heavy treatment. Buckle up for Chicago’s dancefloor activist The Black Madonna and Detroit legend Moodymann alongside Analog Room cohorts Siamak Amidi and Shemroon, as well as Stockholm’s record-slinger Axel Boman and Berlin-based Peggy Gou, DeWalta and Shannon, amongst others. In addition, Hyperdub label kingpin Kode9, low-end ambassador Ikonika and Teklife’s juke champion DJ Earl will step up with some hard-hitting breaks and bass, supported by Essarai from the 264 Cru.
Steigenberger Hotel Business Bay, 9pm, Tickets Booking

The Dubai Weekender will also include RBMA’s Beyond the Noise photo exhibition, which takes viewers into the world of sweat, blood, tears, effort, self-doubt and strength that is present in every musician’s life. It will be on throughout the weekend at d3, starting April 7th.