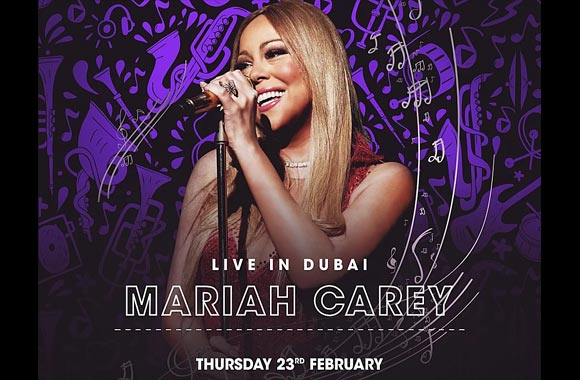 Mariah Carey will perform on 23rd of February in Dubai for the Emirates Airlines Dubai Jazz Festival.
She will be headlining the second night of the festival.

Mariah Carey is an American singer, songwriter, record producer, and actress.
Throughout her career, Carey has sold more than 200 million records worldwide, making her one of the best-selling music artists of all time.
Carey has won 5 Grammy Awards, 19 World Music Awards, 11 American Music Awards, and 14 Billboard Music Awards and has been consistently credited with inspiring a generation of singers

In its 15th year, the Emirates Airlines Dubai Jazz Festival will be held at the Dubai Media City Amphitheatre in Dubai from 22nd to 24th of February.
The Dubai International Jazz Festival is an annual music festival that takes place in Dubai, United Arab Emirates.
The 1st ever edition of the Dubai International Jazz Festival took place in January 2003 at Dubai Media City Amphitheatre featuring mainstream jazz artists over 3 days selling only 1,200 tickets. But, since the 2nd edition the number of fans started growing year over year.