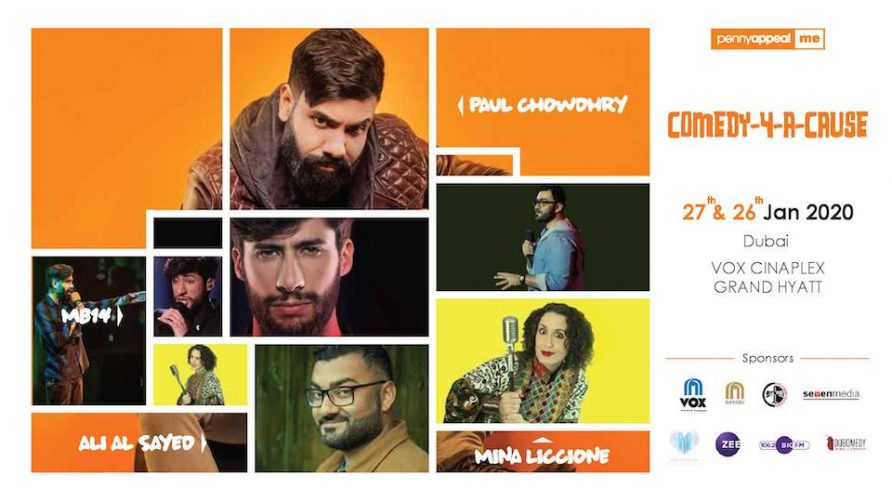 Penny Appeal welcomes world-known comedians to set for the “Comedy-4-a-Cause” this January.

The shows will be held in aid of Penny Appeal’s South Africa Education Program. The project will provide students from impoverished communities with necessary learning resources that will help encourage both their learning experience and academic performance.

Paul Chowdhry is a multi-award-winning British comedian also titled as the first British Asian stand-up to sell out the 10,000-seater venue at Wembley Arena. By his third international tour, Chowdhry had 150 sold-out shows including shows in Australia and New Zealand. By his world-famous show “Live innit”, Chowdhry became the highest viewed comedy show on Amazon Prime.

Holding titles such as the 2018 World Beatbox Crew Champion and the Voice finalist, MB14 is one of the most influential beatboxers of his generation. World-renowned beatboxer extraordinaire MB14.

And to sum up, Ali Al Sayed, Emirati trailblazing award-winning comedian and co-founder of Dubomedy. He has performed in numerous shows at the iconic Comic Strip Live in New York as a headliner in Caroline’s on Broadway, the New York Arab American Comedy Festival, and the Edinburgh Fringe Festival to name a few. He took “Funniest People in 2012” by Rolling Stone. And accepted the “Comedian of the Year 2016” award by Esquire Magazine.

Mina Liccione, co-founder of Dubomedy is an award-winning performing artist, comedian and choreographer from New York. She has been on Broadway in STOMP, MTV’s The Grind, Edinburgh Fringe Festival, National Lampoon’s film Pucked, Image Nation’s As One: The Autism Project and acted as the comedy coach for Cirque Du Soliel’s Corteo.

Dubai events are licensed by the Islamic Affairs and Charitable Activities Department.