Calum Scott at Dubai Opera in Dubai | Coming Soon in UAE
Home / Upcoming Events in Dubai and other Emirates / Culture & Entertainment/
To get your personalized content feed, feel free to register, sign in and select what interests you in your Preferences. 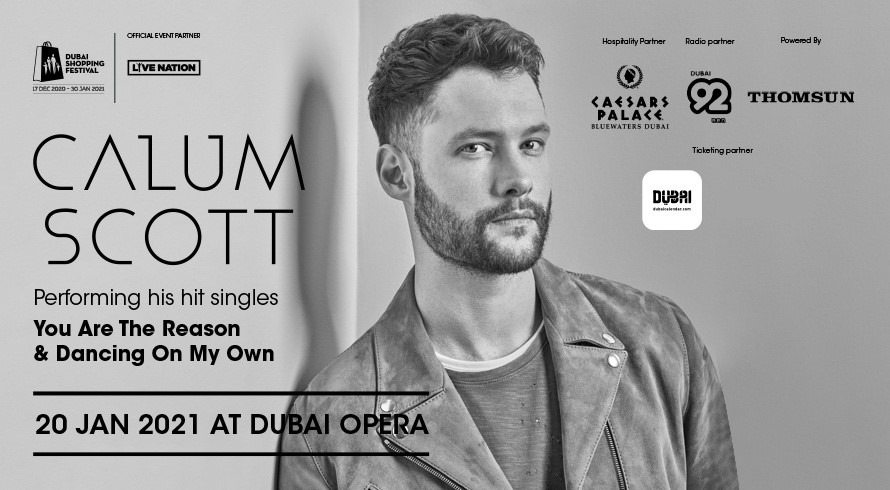 Dubai Shopping Festival will be presenting the performance of Singer-songwriter, Calum Scott at the Dubai Opera on 20 January 2021.

This event, which is a part of the ongoing shopping festival will treat his fans to hit singles from the singer’s number one debut album ‘Only Human’, including ‘You Are The Reason’, ‘Dancing On My Own’, ‘No Matter What’, and more.

Calum Scott is often described as the golden-voiced singer-songwriter due to the combination of his stunning pure voice and vulnerable and raw lyrics. His critically acclaimed vocal style got him a standing ovation and even won him the golden buzzer from Simon Cowell on Britain’s Got Talent for his rendition of Robyn’s Dancing On My Own back in 2015. His debut album, ‘Only Human’, hit number 1 on iTunes in 21 countries amassed over 6.4 billion combined streams and more than 50 platinum and gold awards across 21 countries. The musician’s hit song, ‘You Are The Reason’, is certified platinum and has over 3.7 billion streams and has featured in Spotify’s Top 25 US Viral 50.

Ticket with the QR code needs to be produced at the entrance and masks are mandatory. There will be limited seating as the venue will be following social distancing rules.