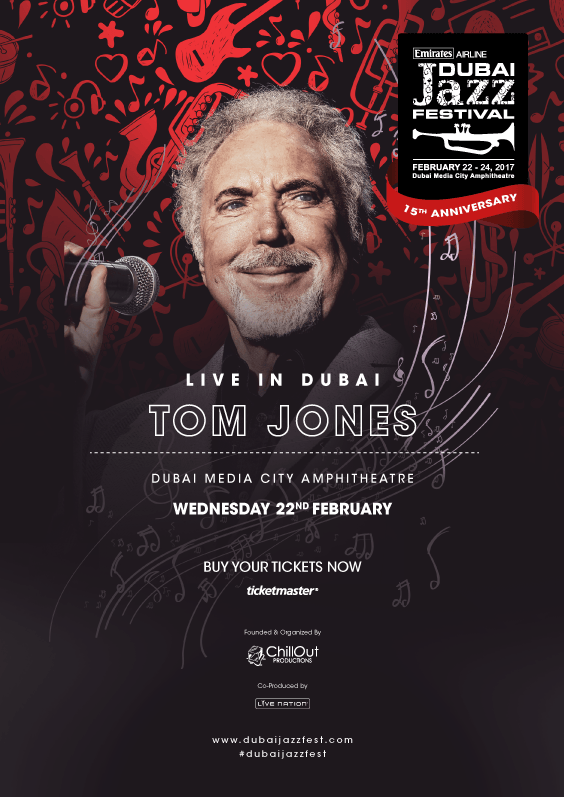 Legendary Tom Jones will perform on 22nd of February, 2017 in Dubai for the Emirates Airlines Dubai Jazz Festival.

He will be headlining the first night of the 15th edition of the Festival at Dubai Media City Amphitheatre.

Jones received a Grammy Award for Best New Artist in 1966, an MTV Video Music Award in 1989, and two Brit Awards: Best British Male in 2000 and the Outstanding Contribution to Music award in 2003. Jones was awarded an OBE in 1999 and in 2006 he was knighted by Queen Elizabeth II for services to music.

In its 15th year, the Emirates Airlines Dubai Jazz Festival will be held at the Dubai Media City Amphitheatre in Dubai from 22nd to 24th of February.
The Dubai International Jazz Festival is an annual music festival that takes place in Dubai, United Arab Emirates.
The 1st ever edition of the Dubai International Jazz Festival took place in January 2003 at Dubai Media City Amphitheatre featuring mainstream jazz artists over 3 days selling only 1,200 tickets. But, since the 2nd edition the number of fans started growing year over year.