Shakespeare Under the Stars 2017: Macbeth | Coming Soon in UAE

Shakespeare Under the Stars 2017: Macbeth 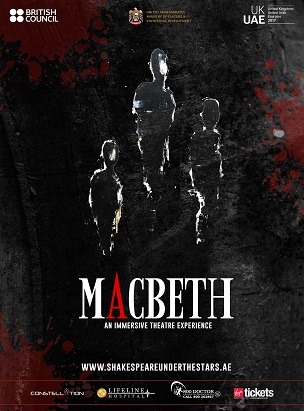 Shakespeare Under the Stars 2017: Macbeth will be shown at Abu Dhabi National Theatre on 14th and 15th of April.

Shakespeare Under the Stars 2017: Macbeth is an immersive, promenade production of Shakespeare’s classic tragedy about ambition, power and madness.
Much like 2016’s sold out production of Romeo+Juliet, Macbeth is a modern interpretation set in a disruptive and unique style.

No one should expect to be seated facing a stage. The audience moves and roams to find various scenes while characters may be spotted all around, even interacting with the audience. The play kicks off with a live fashion show and quickly descends to madness.

In an unusual twist, Macbeth will feature an all-female cast, subverting the notion of the all-male casts of Shakespeare’s time. An experienced and trained multi-national cast with extensive understanding of the local environment will bring the characters to life.

The UAE Ministry of Culture & Knowledge Development bring this event to life in partnership with the British Council as part of the UK/UAE 2017 Year of Creative Collaboration.

Shakespeare Under the Stars is produced by Constellation Productions, conceptualised and executed under the Artistic Direction of Liz Hadaway.