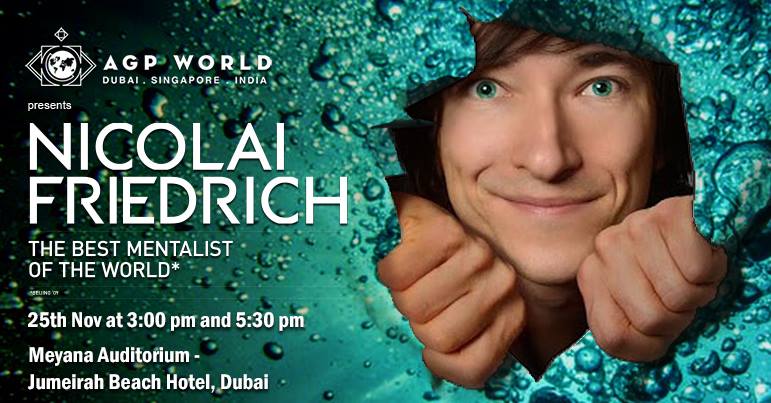 The concert of German mentalist and master of illusion, Nicolai Friedrich will take place on 25th of November, 2017 at the Meyana Auditorium, Jumeirah Beach Hotel.

Nicolai Friedrich belongs to the new generation of magicians, who charm the audience not only with technical equipment but with an exceptional stage presence. He captivates with his charisma, his charm and his comedic talent. The pleasure and joy of his work is always felt and transmits to his audience. So he manages to transform the sceptics’ critical eyes into bright children’s eyes in no time at all.

NICOLAI was crowned “The Best Mentalist of The World” in Beijing 2009 and has since then performed in Singapore, Austria, Switzerland, Greece, U.K, Malta, Mexico, Italy, Australia, Belgium, France, Spain, China, Turkey, India, Germany, with more than 5000 shows to his credit.

The audience will not only witness but actually be part of his craziest tricks till date. His mixture of visual artistry, fantastic comedy and fascinating mental illusion is one of a kind. It is a refreshing brainteaser combined with so much laughter that guest`s stomach will hurt, creating a result that is guaranteed to blow their mind.